Things have been pretty quiet here lately, however, the blogging hiatus has finally come to an end as we are just about to head off on our next big adventure. On Saturday (tomorrow!) we will be departing for four weeks overseas, spending 11 days in Iceland and the remaining time in France. As with our previous trips, I will aim to blog as regularly as possible, so I thought I’d start by writing a bit about our plans.

Our trip will actually start with a 6 hour stop-over in Copenhagen. Depending on how tired we are when we arrive, we are hoping to kill some time by exploring downtown Copenhagen before our flight to Reykjavik, Iceland.
Iceland has been on my bucket list for quite a while now. I can’t remember when it ended up there. Watching The Secret Life of Walter Mitty certainly helped (coincidentally, we saw The Secret Life of Walter Mitty a couple of days after we returned from our last big overseas trip in 2014). If you haven’t seen the film, please watch it! The majority of it was filmed in Iceland (including the Greenland and Afghanistan scenes). Iceland has recently become a popular destination with photographers due to its amazing natural beauty so I cannot wait to experience and photograph it for myself.
The map below shows all of the places where we will be stopping (overnight) in Iceland. As you can see, we will be circumnavigating the island, travelling in an anti-clockwise direction. 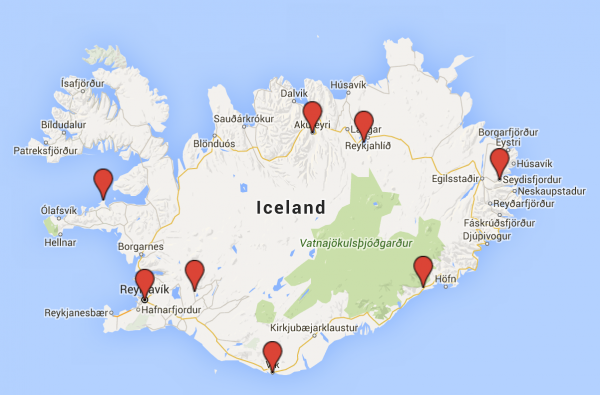 (Click here for an interactive version of the Iceland map https://www.google.com/maps/d/edit?mid=zpuXMQF4TnOE.kYRCzss6CAt8&usp=sharing)

I can’t really say that there is anything in particular that I’m most looking forward to in Iceland as the whole trip is going to be fantastic. Our visit will coincide with the summer solstice so we will have 24 hours of daylight for the entirety of our visit. As we will be just below the Arctic Circle, the sun will set (around 12am), rising again around 3am, however, it’s not going to ever get dark. This will be perfect for many hours of photography and Ian will get to enjoy his longest birthday ever (as opposed to the shortest day he usually has in the southern hemisphere)! I’m also hoping to be able to see and photograph some puffins while we are in Iceland.

From Iceland we head to France for the remainder of our trip. After flying into Paris, we will be catching a train to Grenoble where we will meet Mum and Dad, pick up a car and head to Bourg d’Oisans and Alpe d’Huez. 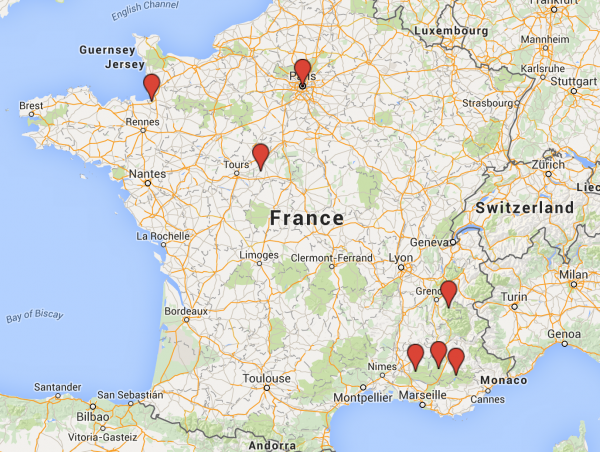 (An interactive version of the France map is available here https://www.google.com/maps/d/edit?mid=zpuXMQF4TnOE.kkPZuIAJFahs&usp=sharing)

At this point in the blog post I need to delve into a bit of a backstory. If you’ve been following this blog for a while (or see me regularly in real life) you would know that I quite enjoy my sport and keeping active. For the last couple of years this has mostly taken the form of running. After being a long time fan of watching cycling events, last October we finally got around to buying some decent road bikes and there has been no turning back. I love cycling. I’ve still been running very occasionally but cycling is now my preferred fitness pursuit and I could do it all day, every day (almost). Having watched cycling events such as the Tour de France for some time, I was aware that one of the most iconic mountain climbs to ride is Alpe d’Huez in the French Alps. So, while planning our trip, we decided to add it to our list and attempt to cycle our way to the top. For those who aren’t familiar with Alpe d’Huez, it has 21 hairpins and an average gradient of 8% over the 13 or so kilometers to the top. It’s going to smash me. It will most certainly be the hardest thing I’ve ever had to do physically, even more so than the half marathons I’ve run. I’ve been training as much as I can for the last couple of months (albeit mostly on the indoor trainer trying to fit it in after work) and while I could always have done more training, I’m fairly happy with what I have done as I’ve seen some positive improvements out on the road. I guess I’ll find out how much the training has helped on June 24. Honestly, I’m a little scared about this but also excited for the challenge. The penultimate night before our little ride will not contain much sleep as we have a 1am flight out of Iceland followed by several hours on the TGV once we arrive in France to get to Grenoble. Hopefully the lack of sleep won’t have too big an impact.

For those who are interested, below is a video of the Alpe d’Huez climb so that you can see exactly what we’re in for, as well as a view of the profile of Alpe d’Huez.

Following our climb of Alpe d’Huez, we will have a few days in the Alps before heading south to Provence for a week. We will be spending a couple of days in the Verdon Gorges region (thanks to a previous Tour de France for highlighting the beauty of this region), followed by a couple of days in Forcalquier and then Gordes. We spent a week in Provence during our last trip in December 2013 so I’m really looking forward to experiencing it in summer. Seeing (and, of course, photographing) fields of lavender and sunflowers has been on my bucket list for a long time so I’m quite looking forward to experiencing this while soaking up some sunshine and warmth (even though it will be summer in Iceland, the temperatures will be colder than an average winter’s day in Sydney).

After our week in Provence, we head north for a week in the Loire, where we will be reunited with my parents as well as my sister and brother-in-law. This will be Mum and Dad’s third visit to the particular B&B we will be staying. Enjoying a week in the Loire at Sambin together as a family was the catalyst for this trip in the first place. While in the Loire we will visit several of the numerous chateaus the region has to offer as well as seeing two stages of the Tour de France (also on the bucket list). Our plan is to be at the finish in Angers to see the end of Stage 3 on July 4 and then be somewhere along the route during Stage 4 the following day. In addition to doing the touristy thing and seeing the Tour de France, we are hoping to do some cycling while in the Loire as well as having a bit of down time as we will be on the go for most of the trip.

At the end of our week in the Loire we head north to Mont Saint Michel on the Normandy coast. Growing up, I had a photograph of Mont Saint Michel stuck to the back of my bedroom door and so seeing it in real life is another item on the bucket list that we will be ticking off. We will only have 24 hours there, after which we head back to Paris for one night before beginning the long journey home.

This trip has been almost one year in the planning so it feels quite surreal to be less than 24 hours away from departure. Again, if you’ve been following this blog for a while (or see me regularly), you would know how much I love to travel and so I’m really excited to have the opportunity to experience some new places and revisit some old ones (although in a different season). As with the previous trips, there will be a lot of photography that will be done on this trip (which I hope to blog as much of as I can) and hopefully even some video as Ian is now equipped with a GoPro. In addition to experiencing and photographing more of God’s awesome creation, I’m looking forward to having a break from my every day life. Life has just been getting busier and busier over the last few years to the point where we are both burning out and are exhausted, so we’ve agreed that during this trip we will re-evaluate our priorities and hopefully make some plans that will improve things. At this point I’m up for anything.

I think that pretty much summarises our plan for the next month. Stay tuned for the next blog post from somewhere in Iceland!